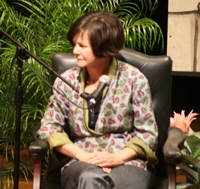 Australian-born Geraldine Brooks is the author of novels including People of the Book and March, which was awarded the Pulitzer Prize for fiction in 2005. As a journalist for The Wall Street Journal in the 1980s and 1990s, Brooks covered crises in the the Middle East, Africa, and the Balkans.

In this recording from the 2009 Key West Literary Seminar, Brooks reads from March, which tells the story of Captain March, known to readers of Louisa May Alcott’s Little Women as the character of the father and husband who has left the family to fight in the Civil War.

From KWLS 2009: Historical Fiction and the Search for Truth.

More than 500 unique presentations by the world’s most influential writers are available in our audio vault for use by educators, students, and readers worldwide. You can play many recordings immediately on our site, while others are available by request. Select a name from the index to begin, or browse our featured audio for highlighted selections with full liner notes.