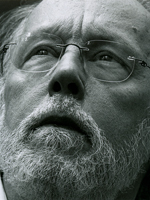 “There are simply no answers to some of the great pressing questions. You continue to live them out, making your life a worthy expression of a leaning into the light.” (Barry Lopez)

Barry Lopez’s books include Arctic Dreams, for which he received the National Book Award, Of Wolves and Men, a finalist for the National Book Award, and several collections of short fiction, among them Resistance and Light Action in the Caribbean. He’s also the author of two collections of essays, Crossing Open Ground and About This Life, and an illustrated fable, Crow and Weasel, a New York Times bestseller. His work appears regularly in Harper’s, National Geographic, The Georgia Review and other American journals and magazines as well as in Letras Libres (Mexico), Brick (Canada), Granta (UK), Irish Pages (Ireland), Neue Rundschau (Germany), Libération (France), Pluriverso (Italy), Westerly (Australia), and Folio A (Japan). He’s the recipient of major awards from the American Academy of Arts and Letters, the Association of American Geographers, the Academy of Television Arts and Sciences, the New York Public Library, and the National Science, Guggenheim, and Lannan foundations. He has visited remote and settled parts of nearly eighty countries and is an elected Fellow of the Explorers Club. Mr. Lopez grew up in Southern California, spent his teenage years in Manhattan and since 1970 has lived in rural western Oregon. He is at work on a book about international travel.