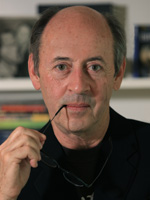 Billy Collins is a two-term United States Poet Laureate, New York State Poet, and the author of ten collections of poetry, including his latest, Aimless Love: New and Selected Poems.

Called “the most popular poet in America” by the New York Times, Collins has led an unflagging career as a poet and public figure, and has introduced countless readers around the world to new poets and poetry. With the Library of Congress, he established Poetry 180, a teaching aid for high school students founded on the belief that “high school is often the place where poetry goes to die.”

Collins has received fellowships from the New York Foundation for the Arts, The National Endowment for the Arts, and the Guggenheim Foundation, and has won the Mark Twain Prize, the Bess Hokin Prize, the Frederick Bock Prize, the Oscar Blumenthal Prize, and the Levinson Prize—all awarded by Poetry magazine. In 1992 he was chosen by the New York Public Library to serve as a “Literary Lion.” His poems appear regularly in The Best American Poetry series, and he edited Bright Wings: An Anthology of Poems about Birds.

Today, Collins is a Distinguished Professor of English at Lehman College (CUNY) and a Distinguished Fellow at the Winter Park Institute of Rollins College. He divides his time between New York and Florida.

You know the parlor trick.
wrap your arms around your own body
and from the back it looks like
someone is embracing you
her hands grasping your shirt
her fingernails teasing your neck
from the front it is another story
you never looked so alone
your crossed elbows and screwy grin
you could be waiting for a tailor
to fit you with a straight jacket
one that would hold you really tight.