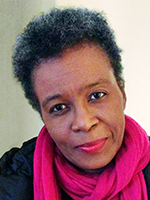 Claudia Rankine is a poet, playwright, and the editor of several anthologies. Born in Kingston, Jamaica, she was educated at Williams College and Columbia University. Her most recent work, the book-length poem, Citizen: An American Lyric, was a finalist for the National Book Award and won the 2014 National Book Critics Circle Award for poetry, the first book in the award’s history to be dually nominated in both poetry and criticism. Her work often blends genres and explores the subject matter of race and the imagination.

In 2014, Rankine was awarded Poets & Writers’ Jackson Poetry Prize, given to an American poet of exceptional talent who deserves wider recognition. “Rankine’s poems foster a quite nearly cinematic sense of suspense, striking notes of urgency, anxiety, and momentous inevitability,” the judges commented. “In particular, the collections Don’t Let Me Be Lonely and Citizen: An American Lyric invite the reader to empathize with the social ‘other,’ with victims of violent aggression committed in hatred and ignorance, and with speakers subject to a more generalized American malaise. These poems do the work of art of the highest order—teaching, chastening, changing, astounding, and humanizing the reader.”

Rankine is the author of five collections of poetry. She has also authored the plays, Provenance of Beauty: A South Bronx Travelogue and Existing Conditions (co-authored with Casey Llewellyn). She is a co-editor of American Women Poets in the 21st Century, from Wesleyan University Press, and The Racial Imaginary, from Fence Books. She is a recipient of awards and fellowships from the Academy of American Poets, the American Academy of Arts and Letters, the Lannan Foundation, Poets and Writers, and the National Endowment for the Arts. She teaches at Pomona College.