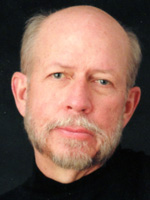 James W. Hall is the author of eighteen novels. Most of them, like his most recent, Going Dark, feature a hard-core loner named Thorn, who makes a meager living tying bonefish flies. Thorn and his private-eye pal, Sugarman, have teamed up in a dozen books to thwart animal smugglers, cruise-ship hijackers, rogue medical experimenters, and other assorted villains. For a man who simply wants to be left alone to contemplate the island light and sweet sea breezes of Key Largo, Thorn has been drawn into a surprisingly long string of adventures to right wrongs and avenge the deaths of his friends, relatives, and lovers; and has taken innumerable gashes and wounds in the process.

Hall’s nonfiction work includes Hot Damn!, a collection of personal essays he wrote for the Ft. Lauderdale Sun-Sentinel’s Sunshine Magazine, as well as some he wrote for the Washington Post and the Miami Herald. His most recent nonfiction effort is Hit Lit, which is an analysis of twelve of the most commercially successful novels of the last century and the dozen features those books have in common.

Starting out his writing life as a poet, Hall published four collections of poetry, three of them with Carnegie-Mellon University Press. His poems appeared in Poetry, American Scholar, North American Review, Antioch Review, Poetry Northwest, and many other literary magazines. He is also the author of two collections of short stories: Paper Products and Over Exposure, an ebook that contains his Edgar Award-winning short story, “The Catch.”

Hall has a master’s degree in Creative Writing from Johns Hopkins and a doctorate in literature from the University of Utah. In the early 1970s, he founded the creative writing program at Florida International University, where he taught literature and writing for forty years.