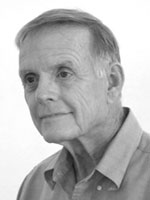 Richardson’s chosen form is the “intellectual biography,” which means he attempts to read not only everything his subjects wrote, but everything they read as well. This immersion allows Richardson to tell the story of his subjects as if he were their contemporary, and to provide an uncanny portrait of that facet of the writer’s life that makes him or her worth remembering at all: the writer’s work and thought. “Aside from his learning, which is prodigious,” says Banville, “Richardson writes a wonderfully fluent, agile prose; he has a poet’s sense of nuance and a novelist’s grasp of dramatic rhythm… Can there be any more exciting critical writing than this?”

Richardson’s honors include the Melcher prize, the Parkman Prize, and the Bancroft Prize and in 1998 he was awarded an Academy Award in Literature from the American Academy of Arts and Letters. He has also been a Guggenheim, a Huntington Library, and a National Humanities Center Fellow. He and his wife, Annie Dillard, have called Key West home since 1994 and he is a former board member and current honorary board member of the Key West Literary Seminar. His most recent books, are First We Read Then We Write: Emerson on the Creative Process and The Heart of William James. October, or Autumnal Tints, by Henry Thoreau with original watercolors by Lincoln Perry, will be published by W.W. Norton in the fall.