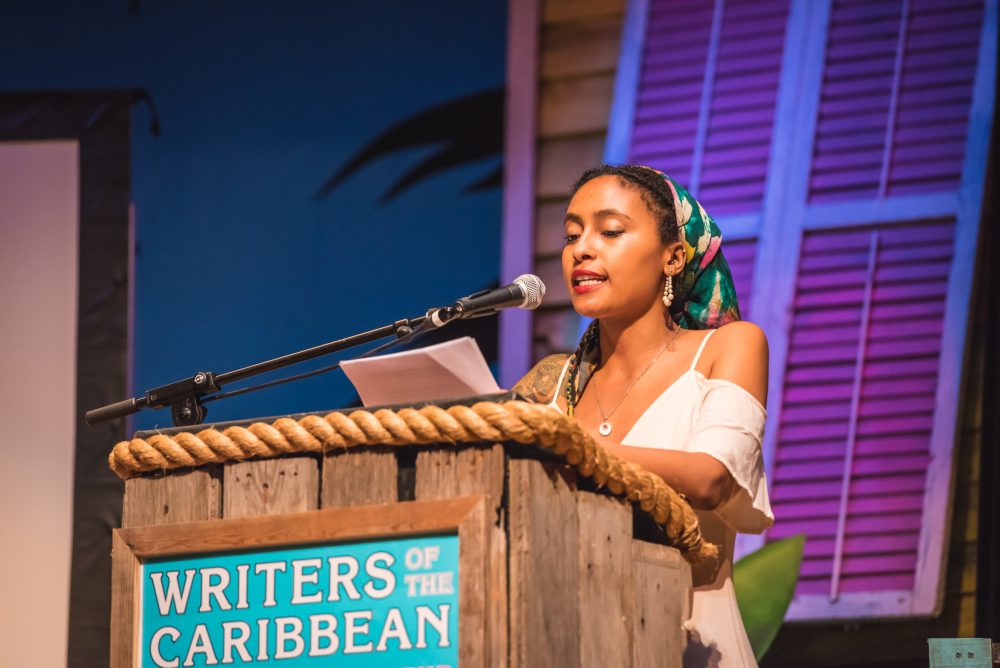 Each year, the Key West Literary Seminar presents three prizes for emerging writers: the Cecelia Joyce Johnson Award for a short story, the Marianne Russo Award for a novel in progress, and the Scotti Merrill Award for poetry. Winners receive a fully paid trip to the seminar and writers workshop program. On Sunday morning, each of the three 2017-18 winners read from their work.

Sara Johnson Allen, who won the Marianne Russo Award, read from the preface of her novel in progress, We Make Them Pay. Allen, a native of Raleigh, North Carolina, is an associate professor at Endicott College in Beverly, Massachusetts. She is also the co-founder of the L’Atelier Writers Workshop and Retreat. Peyton Evans and Carol Balick, sponsors of the award, selected Allen’s novel in progress. In Allen’s darkly humorous work, a tough, elegant young woman from a hardscrabble Southern background has nearly secured an upper class future in Boston when her con-artist mother reappears in her life, with a threat and an urgent demand — the lives of three children are at stake.

The winner of the Scotti Merrill Award was selected this year by Billy Collins. Michael Lee, a youth worker and organizer who lives in Minneapolis, recently graduated from the Harvard Graduate School of Education. He read three poems: “Animal,” “Tapestry In Five Parts,” and “Secondly Finally.” The final two are part of his book Heavenface, a manuscript near completion. Lee’s poetry examines masculinity, addiction, and American despair in language with a fierce, celestial quality.

Dantiel W. Moniz won the Cecelia Joyce Johnson Award for her short story “Outside the Raft.” At the lectern, Moniz read from the story, which deals with two bright little girls in the home of a grim grandmother who “sees devils everywhere” and has been a project of hers for many years. It will appear in Tin House this summer — a reminder to us all, she says, to “keep submitting.” Moniz, a Florida writer who will receive her MFA from the University of Wisconsin-Madison, has also published work in Ploughshares.

Allen said that the three writers “really clicked” at the seminar, and were able to work on their presentations together and become good friends. Lee and Moniz both spoke of how important the award was to young writers — the experience of being seen, of being validated in a particular context, and of how energizing it is for their hopes and their work. (Especially, as Lee noted, for someone from Minnesota in January.)

Amy E. O’Neal, who also publishes under the name of L.T. Patridge, received her MFA from Vermont College of Fine Arts in 2017. Originally from Greenville, Mississippi, Amy lives in the Boston area, where she writes historical fiction, dark fantasy, and occasional poetry.