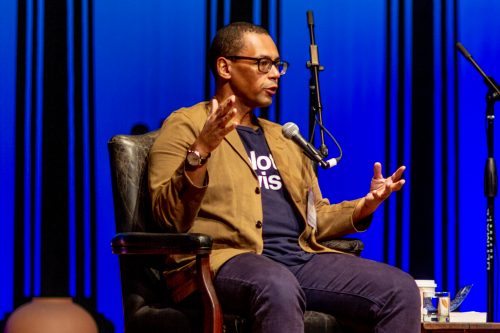 Victor LaValle’s latest novel, The Changeling, is a hybrid fairy tale and horror story. Set in New York City, it tackles many issues that are part of our everyday reality. In his conversation with Kate Tuttle, LaValle dove into the major themes of the novel: parenting in this social media frenzied world, and the fears parents face.

LaValle began by sharing a personal anecdote about his first week of fatherhood, when, after many tries swaddling his newborn, he finally perfected the swaddle. In a celebratory mood, LaValle did what most of us do–he picked up the phone and snapped a picture. After a few swipes, his week-old baby was on social media. Excited by the rising number of likes, LaValle checked his status frequently, noting that people who didn’t even know him had liked his post.

A new fear wormed into his mind: had he put his child in danger due to his fervor to show others what an amazing dad he was? This question led to a series of other questions, which lead him to begin writing his latest novel. LaValle continued his conversation by revealing a frightening truth: parents can’t protect their children from everything.

As the mother of a teenage daughter and middle school-aged son, LaValle’s words struck me not because they were a new revelation, but because they are words rarely spoken aloud by parents. Rarely do adults voice their fears; instead they opt for distractions in order to shroud the monsters they once saw in the shadows or hidden in their closets. LaValle pointed out that adults are quick to say they survived or are surviving when they contemplate their past (or present, for that matter). In discussing our own youth, many are quick to highlight their own survival status, dismissing the shadows and monsters still lurking in their lives. LaValle countered: ‘I survived’ is not the highest compliment, you want to hear ‘I thrived.’

The novelist went on to discuss empathy as a political act as a writer. Empathy is one of the strongest connections a person can have with another, according to LaValle. Nodding as he spoke, I looked at the other heads in the room doing the same and smiled to myself. LaValle demands empathy from his readers, especially in respect to the mother character, Emily. Deconstructing the archetype of the mother, LaValle draws a portrait of a flawed woman. He is aware of the likelihood of knee-jerk reactions condemning a mother who is not all self-sacrificing and doting, and so LaValle challenges his readers to look deeper into Emily’s character.

The Columbia University professor shared how he’s had to develop empathy not only as a writer for his characters, but also for his own family, some of whom suffer from mental illness. Mentally ill people are often thought of as being nonsensical, but there is often a series of logical reasoning behind their behavioral disturbances. This bridge in thinking is what creates a world of empathy-and ultimately one of compassion and love–but to achieve this we must look at our own fears, the collective fears of our society, and learn from the discomfort they produce, despite how much we may want to run away and hide.

LaValle left the audience thinking about his assertion that the purpose of a fairytale is not the story, but the moral. Perhaps it’s our fears that keep us from being the empathetic beings we were all along, before the world got its hands on us.

Connie Pertuz-Meza writes stories about her life, family, and ancestors. Propelled to action as a New York City public school teacher, and mother of a teenage daughter and middle school-aged son, she is currently working on a semi-autobiographical YA novel. She documents her life through personal essays on her blog, and is a staff writer for Hispanecdotes.com, a monthly online literary magazine. Her creative nonfiction has been published in Acentos Review, MUTHA, Medium, and in several anthologies representing writers of color.

You can listen to Victor’s talk here.