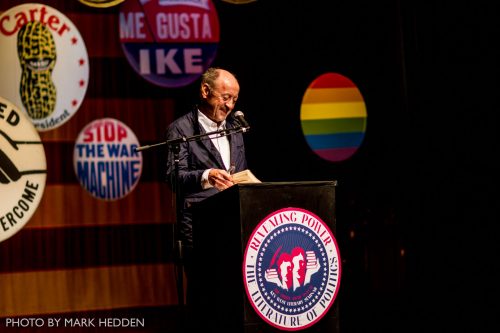 “I’m not a political poet,” asserts Billy Collins as he begins to usher the KWLS audience through an exploration of political poetry. He follows with a funny anecdote about his time as Poet Laureate, when a child asked him what his place in line was to be president.

There are two problems with the political poem, according to Collins: It has a shelf life, and it must adhere to a topic. Political poems usually do not transcend time because of their connection to the day’s headlines. Written as current events, Collins says, “[they] read like yesterday’s paper.”

Poetry should develop organically, Collins believes, taking form as the poet is writing. Ideally, he says, a poem’s topic is more “launchpad” than contrivance. Despite these obstacles, Collins selects highlights of the sub-genre and masterfully recites them, eliciting a broad range of emotion from the audience at San Carlos.

Collins begins his homage to political poetry by reciting Walt Whitman’s “Election Day, November, 1884,” illuminating Whitman’s argument that the “power of the country lies in the power to vote.” With his signature wit, Collins breaks up any somberness, and the audience can’t help but laugh at his analysis.

He also dwells on the realities of war and its effects. His recitation of “Photograph from September 11” by Wislawa Szymborska, in which the poet attempts to not write the last line, is especially poignant. By the end of the poem, the audience falls silent. Billy notes that one can “assess the silence right after the poem to measure the power of it.”

Staying with the subject of war, he recites his own poem, “Building with Its Face Blown Off,” taking the audience from a war-torn place to one of peace, ending with “olives.” He swears to the audience that in writing it, he made no conscious connection to the symbolism of “olive-branch.”

Finally, he leaves us with “The Polar Bear,” by Jennifer Givhan. While the poem brings us back to current events, it also evokes a sense of fear that is timeless in America. While political poetry may have its obstacles, Billy Collins’s choices prove that policy always intersects with humanity.