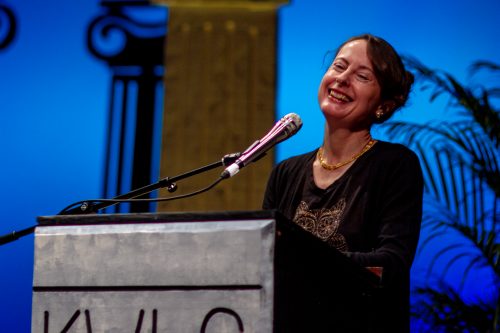 On a stage aptly decorated with Doric columns and a large amphora, Emily Wilson kicked off the first talk of the 37th Annual Key West Literary Seminar, “Translating the Odyssey Again: How and Why,” by reading from her 2018 translation of Homer’s Odyssey to a packed auditorium. Contained in the verse was a description of Hermes flying over the indigo ocean “laced with crisscross currents intertwined together,” a line which felt like an appropriate description of Wilson’s own lifelong commitment to this year’s themes of adaptation and archetype.

Already a prolific translator and writer, Wilson’s career seems tailor-made for her appearance this year. From her position as a Professor of Classics at the University of Pennsylvania, she has written about tragic tropes from Sophocles through to Milton, and about figures in Classical antiquity whose afterlives have taken on mythic proportions, like Socrates and Seneca. She understands with acute clarity why stories and figures linger and how they speak to writers and readers alike about the big ideas.

Her pledge to expose the multi-vocality of The Odyssey led her to delight the Key West audience with various voices – high-pitched for Penelope and gruff for Odysseus. In a playful attitude, she remarked that Homer’s preferred pronoun would probably be “they,” since Homer himself is a kind of byword for the plurality of Greek oral tradition. Wilson went on to address the skepticism about the need for another Homeric translation by offering a simple explanation: Homer has never been translated this way. She is right about this fact. She has kept Homer’s form and style by keeping the same number of lines and delivering the poem in iambic pentameter (previous versions have translated the poem into free verse when it would otherwise have been recited in dactylic hexameter). Her style is readable and clear — domesticating the language to keep its clarity and vividness in English.

Departing still further from former translations, Wilson spoke about her critical considerations of gender and the ways in which women are referenced in the poem. As such, she chose to highlight the fact that most of the female characters are slaves (not maids or servants), a distinction that makes spotting the systematic silencing of women in the poem easier.

The most impactful moment of the talk was when Wilson read her translation of the scene where Telemachus hangs the twelve raped slave girls. In her version, Wilson describes the girls as doves who crash into the nets, unable to return home. A palpable and somber silence pervaded the auditorium as Wilson commented on homecoming – who returns home and who never makes it?

Translation, Wilson observed in the Q&A portion, is like a portrait; a sitter might sit for many different portraits and each one, however different, will manage to capture a timely truth. Wilson’s talk set a high bar and brought to the fore important truths about nostos, xenia, gender, and identity, thereby setting the tone for this year’s seminar which — in the face of current events and in the spirit of Wilson’s Hermes – is ambitiously examining the tangled, crisscross patterns of literary influences that interweave all of humanity.

Michelle Alonso teaches literature and composition at a high school in Hialeah, Fl. She is particularly interested in identity, gender, and theories of translation in literature.

You can listen to Emily Wilson’s talk here.