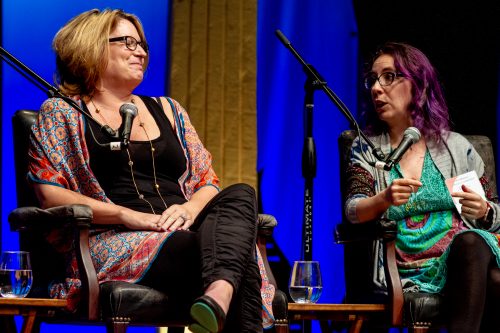 In an animated discussion Friday afternoon, Meg Cabot and Naomi Novik tackled topics from writing female characters who have agency in their worlds, to fanfiction and computer coding, to the distraction of the Internet. Cabot and Novik had a mutual admiration society going, led by moderator Nancy Klingenger.

Cabot lays her fascination with Arthurian legend at her mother’s feet. She said her mother was obsessed with Camelot. Cabot wanted to give Guinevere a fair shake, feeling that she didn’t deserve the treatment she got in the original Arthurian tales.

Both authors were asked about research methods. Cabot said she did research Arthurian legend to see if it was based on reality in any way, but did not find a definitive answer. Cabot wanted to know how Novik researched dragons for her Temeraire series. The surprising answer was that Novik looked up research on dinosaurs, rooting her fantastical creatures in a reality that readers could easily accept.

Cabot, in her Abandon series, based on the legend of Persephone, also ties her mythical adaptation to reality, using real Key West locations (such as the Underworld being located beneath the Key West Cemetery) as well as some local traditions (such as a high school tradition known as “coffin night”). In reference to basing fictional locations off of real ones, Cabot joked, “I don’t know if you’ve heard of Genovia,” which she then said was based on Morocco.

When asked how the authors felt about whether the Internet was changing the way stories are transmitted, Cabot confessed, “I get a lot less work done [because of Internet distractions].” She admitted also to writing novels on an Alphasmart, a word processing tool with no Internet capability.

Novik shared a story of how she discovered fan fiction after watching Star Trek: The Next Generation in college, and getting so mired in that world – a world with no barriers to entry, with no commercial aspects, a world in which it doesn’t necessarily matter if it’s good writing or not, as long as it ties into the world – that by her senior year of college she spent a great deal of time running a MUSH (Multi-user Shared Hallucination) and getting a degree in Computer Science.

Novik asked Cabot about voice in her young adult and middle grade female characters, saying she found it very authentic. Cabot says she referenced her own teen diaries, and also that “I write like I talk, which is unfortunate, but some people like it.”

All in all, both authors seemed to agree that giving female characters a better stage, and agency in their lives, is very important – a concept clearly defined in the pages of both Cabot’s and Novik’s works.