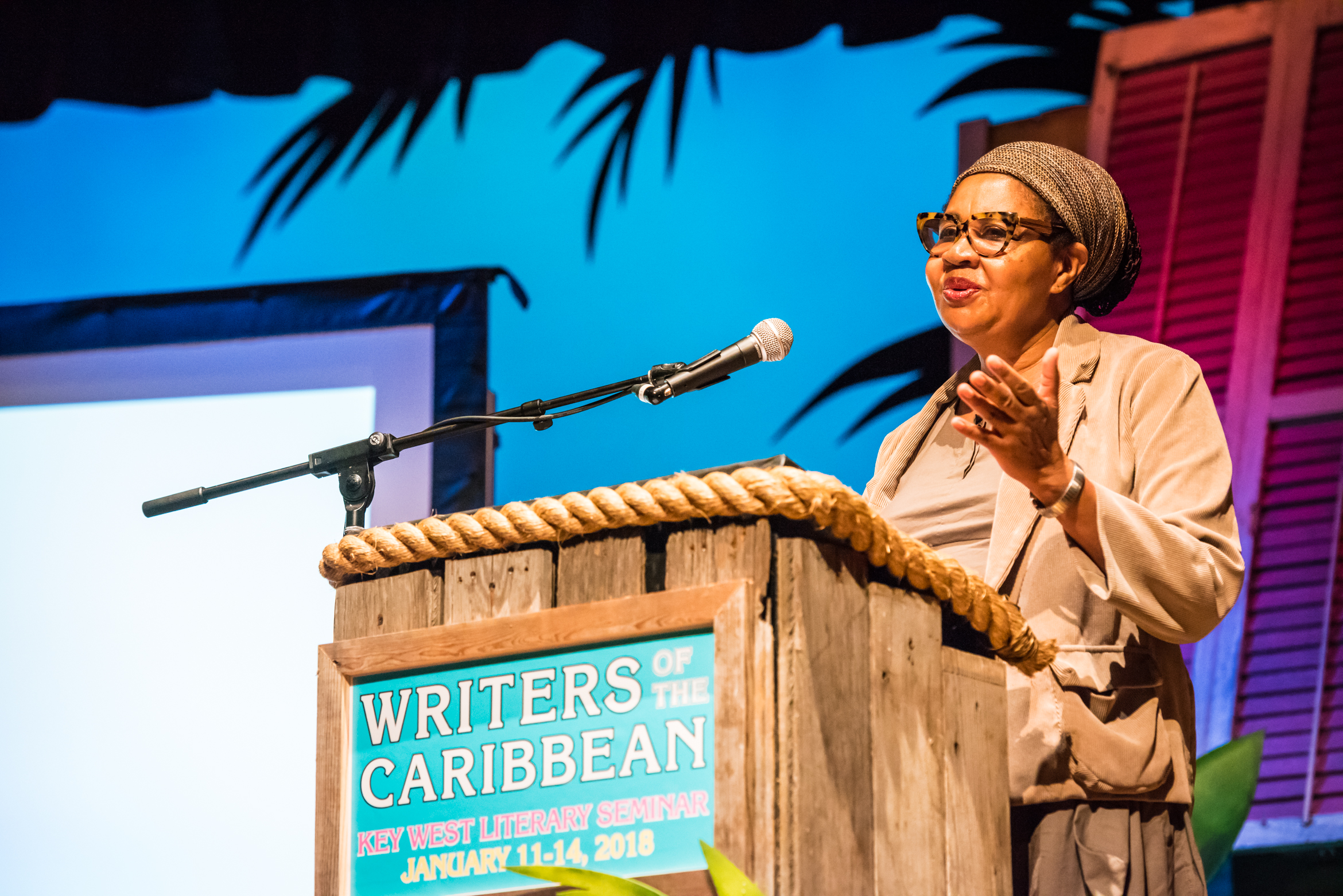 Thursday evening, Jamaica Kincaid took the stage to deliver the John Hersey Memorial Address for the 36th annual Key West Literary Seminar: “Writers of the Caribbean.” Seminar president Diane Shelby welcomed guests and introduced the weekend in the spirit of “sharing the words of homelands that are not our own,” a particularly prescient mission in a time when “isolationism is gaining acceptance.”

The ideas of sharing and place factor deeply into Kincaid’s work, which she explored in her address, entitled “Let Me Appropriate You… And You Can Appropriate Me, Too.” She opened with the image of artist Dana Schutz’s controversial painting “Open Casket,” depicting the corpse of young Emmett Till.  In discussing cultural appropriation, Kincaid ultimately expressed gratitude to Schutz for bringing Emmett Till and his fiercely aggrieved mother, Mamie Till Mobley, back into the public consciousness and conversation.

Using both imagery and language, Kincaid offered a mosaic of the uniquely American practice of appropriation. She deliberated on these ideas through a variety of historic and literary lenses, including Harriet Jacobs’ Incidents in the Life of a Slave Girl and Frederick Douglass’s Narrative of the Life of Frederick Douglass, an American Slave.

In describing the experiences of African captives during the trans-Atlantic slave trade, Kincaid affirmed that “it is in that moment that the reality of appropriation begins… in commodifying the body and the spiritual being.” She described Americas’ legacy of chattel slavery as the “existential attempt to kill a person, to obliterate a person,” which she identified as the seed for modern conversations about cultural appropriation.  Because of this “unspeakable theft,” Kincaid reasoned, “for which there has not been an apology or compensation… we are left to speak of such nonsense as appropriation.”

The address pivoted on a reading of the contrasting Declarations of Independence of the United States and Haiti.  While both nations gained independence by means of violent revolution, Kincaid’s linguistic analysis laid bare the differences between documents penned by free versus enslaved peoples. She credited the historic magnitude of the Haitian Revolution in her own writing as well as in the imaginations and work of fellow Caribbean writers.

Kincaid concluded with her own inspiration in the work of Charlotte Brontë, in particular, Jane Eyre, as a young girl in Antigua.  Citing Bronte as an imperative influence, Kincaid declared that, in moments of youthful mimicry, she had “appropriated her essence,” and offered the admission that “so much of what I am in the world I owe to her.” Kincaid’s exploration of Bronte suggested the value, and even necessity, of cultural exchange as part of forging an artistic identity.

In her conclusion, she asked her audience to consider the open wound on which America was built. While her assessment of the American legacy of cultural appropriation and slavery had teeth, Kincaid left us with this message: “All that we humans make belong to all of us, and we must take from each other in goodwill and with grace.  The only thing we must never, ever take from each other is freedom.”