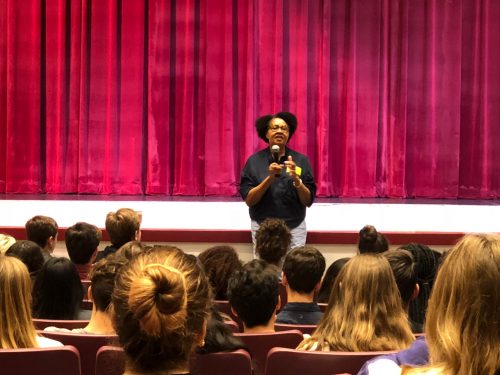 While Rowan Ricardo Phillips took the podium on the blue-lit stage of the San Carlos Friday morning, amid palm fronds, paper moon, and nautical rope, Jamaica Kincaid set her black coffee on the ledge of the chasm – the open orchestra pit in the Key West High School Auditorium. Poised in the narrow space between the missing stage and the knees of those in the front row, Kincaid settled in, turned on her handheld microphone with what may have been a soupçon of feigned bemusement, and looked up to meet the gaze of her teenaged audience through chic, tortoise shell-rimmed glasses.

After declaring herself a person from a “shitty place,” referencing the recent statements of President Trump, Kincaid summarized her journey to becoming a writer in sentences that leapt through decades of her life: at sixteen she was sent from Antigua to work in the U.S., and choosing not to send her salary home, she became first “the best dressed nanny you ever saw” and then, some eight years later, a staff writer for The New Yorker. A voracious reader, and having at some point in her development dispelled the notion that “people no longer wrote literature,” she eventually started to write fiction herself, Kincaid continued. Of her opportunity to work at The New Yorker, Kincaid remarked, “Sometimes unbelievable things happen to people” even “from shitty countries.”

Student questions ranged from biographical inquiries to questions about writing, style, mothers, and politics. Having just read Kincaid’s “Biography of a Dress” in class, one student asked for clarification about a peculiar incident. “Why did you bite her?” Instead of returning a kiss, a two year-old Kincaid had bitten the cheek of the woman who embraced her at the fabric store. Kincaid identified the memory as perhaps the “birth of my desire to subvert expectations. I have always wanted to do the thing that was not expected of me.”

For example, she said, your school has invited this “very nice old lady to speak with you; instead, I’m an old lady … but I am wearing my pajamas.” True, Kincaid sported pajama pants made of light blue shirting with smart, navy piping along the cuffs, one of an admitted 24-pair collection. What became clear was “wearing pajamas in the day” was a stand-in detail for telling the truth, fearlessly speaking her mind, and doing things her way. Kincaid advocated for a radical courage to be an individual, write the way you want, and say what you mean: “I am the reader I write for. I forget that other people are not in my head and I get criticized a lot for it.” But, she continued, “You are the first person you should please. You must have the courage to be you. For example, you are not supposed to begin a sentence with a conjunction, but the next time this rule is inflicted upon you, bring a copy of the King James Bible to your teacher.”

Another student asked what she was trying to accomplish with the use of parentheses in her story, “Girl.” Kincaid cautioned them to be wary of rules and treatise on the structures of various forms. Of the unusual form of “Girl,” she said, “Each piece determines its own laws of physics, its own rules.” Kincaid posited that the parentheses allowed her to acknowledge how thinking is not linear; they were an effort to “more fully render consciousness.” Continuing to discuss form and expectations, she spoke critically of what she sees as an insistence on closure or denouement in contemporary fiction. “Most great things” (she mentioned the Bible and the Illiad as examples) “are not stories; they begin mysterious, and they never end.” She followed, “I’m speaking to you as adults; I hope that’s alright.”

Questions about the salient memories from her early childhood yielded a number of extraordinary stories, as anyone who has read Kincaid would expect: “I remember every aspect of my childhood, much to my family’s dismay.” She recounted being thrown in a toilet by her peers and walking home “all squishy.” She remembered her mother punishing her for neglecting a sibling, having opted instead for an afternoon immersed in reading. Her mother gathered up her library of stolen books and burned them at the “stone heap.”

Another extraordinary and enviable punishment Kincaid suffered for misbehaving at school was to copy the first two books of Milton’s Paradise Lost, a task to which she attributed “her political outspokenness and understanding.” She recounted the profound impression of one illustration : “Lucifer standing on a charred globe, hair very Frederick Douglass, but all serpents.” Political statements were interwoven throughout Kincaid’s talk. “Just to get out of bed every day is a political statement” she said, but she explained how growing up in a colonial society, one’s “whole life was shaped by an understanding of British-ness, which involved dominating us. Everything was politicized.” To demonstrate, she commented to a girl in the front row taking notes in a spiral notebook that hers had been emblazoned “with a portrait of Queen Elizabeth and the Duke of Edinburgh.”

When pressed for more details about the struggles she encountered in becoming a writer, Kincaid shared that her greatest struggle was probably one of “disguising” or struggling to conceal her aspirations from her family because she was sure she would fail. In another sense, she supposed the biggest hurtle must have been “being a young, black woman” but she explained, “it must have been … it was an obstacle, but I wasn’t aware of it.”

Kincaid told many anecdotes that involved making decisions that would allow her to make her work, be herself and speak her mind, even when those decisions challenged people around her. “The truth is so hard” she said, “Lies are so pleasant, but they are lies.” Kincaid’s presence at the high school — with a documentary film crew in tow,  lingering with students and teachers afterward —  demonstrated her candor and willingness to share. After providing reporters from the school’s paper, The Snapper, with a list of her interests (geology, mountaineering, botany, plant and seed collecting), and offering more suggested readings to add to Paradise Lost and Jane Eyre (Zora Neale Hurston, Middlemarch), one student asked, “What does writing mean to you?”

Kincaid responded graciously, and reiterated her message: “It means freedom.”