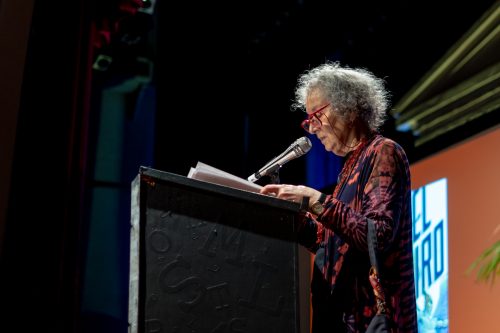 The 37th annual Key West Literary Seminar “Under the Influence: Archetypes & Adaptation” commenced Thursday evening with the John Hersey Memorial address delivered by the inimitable Margaret Atwood. To begin her talk, “Alert! Influences at Work!” she took to the podium and introduced herself: “I’m Margaret Atwood, writer-at-large. Yes, I am still alive, more or less, and I’m your keynote for this evening. How may I help you?” Meanwhile, slides of various iterations of her book covers—Hag-Seed, The Penelopiad and The Handmaid’s Tale—ran across a screen at center stage.

Throughout her address, she danced around a wide range of archetypes, “from Homer to the multiplex,” including moon goddesses, the new Aquaman movie, the Bible and Greek and Roman mythology. Early on she made the crack, “American writers have not yet been sent to the gulag. And Key West is not yet underwater, like the Atlantis,” setting the tone for her dryly humorous address.

She cited the nearly infinite archetypes tied to the number 12, from Zodiac signs to months in a year (divided into four seasons), days of Christmas, tribes of Jacob, witches in a coven and, finally, the number of maids hung by Odysseus at the end of The Odyssey.

She emphasized that before there were books, there were multiple versions of a story told through oral mythology and stories were passed from “mouth to ear to mouth to ear.”

“So when did we start?” she asked. “Stories have been morphing into stories for as long as there have been stories… Stories bend, change, cannibalize, steal.”

She named her early influences as a “budding writer at 19 during the age of mythology… before the age of the Internet, pantyhose, lattes, smartphones, social media and streaming television shows…” She read murder mysteries, Shakespeare, Gulliver’s Travels and the “golden age” of sci-fi with authors like George Orwell and Ray Bradbury.

She joked that having “Medusa hair” might have helped influenced the type of books she’d go onto write, saying that, “when the choice is between being a pushover versus a scary, witch-like supernatural female, I’ll take the latter every time.”

Starting with the most recent, she went onto explain the influences of three of her works. Hag-Seed (2016) is a play that imagines Shakespeare’s The Tempest for contemporary times where Atwood played with the trope of islands as both magical and prison-like if, say, you have no boat.

The Penelopiad (2005) is a retelling of The Odyssey from Penelope’s point of view. Atwood said that Odysseus is one of the more “noteworthy liars” in literature and yet, he tells 90 percent of the story with maids acting as chorus. She always found the hanging of the 12 maids as an honor killing at the end problematic and in her reimagining of the epic, she asks, “Who tells stories to whom?”

Finally, she talked about The Handmaid’s Tale (1985), which has been re-popularized thanks to the Hulu series. Atwood borrows the title from both the Bible and Chaucer’s The Canterbury Tales.

She noted that The Handmaid’s Tale has been adapted into a film, opera, ballet, picture book, protest costumes, a television series and is frequently sited in election commentary, as in: “The Handmaid’s Tale is not a blueprint” and “Make Margaret Atwood fiction again.”

When she wrote the book, she was living in West Berlin before the fall of the Berlin Wall. She also visited Iran and Afghanistan where she saw the realities of totalitarian regimes and the subjugation of women plainly. In explaining her various influences for the book, she discussed how early Puritanical theocracy was hard on women and in modern western society, we don’t have to look too far back to see the mistreatment of women. During the first two decades of the 21st century, Atwood has observed anxieties about the future of the planet and society. When these anxieties arise, she says a common thread is almost always the “roll back of women’s rights.”

To conclude her talk, she asked herself rhetorically, “What’s my hope with The Handmaid’s Tale? That it remains between its covers.”

Shayne Benowitz is a journalist, travel writer and essayist based in New York City. She’s worked on the staff at Key West Literary Seminar for a decade and she’s currently pursuing her MFA at Sarah Lawrence College.