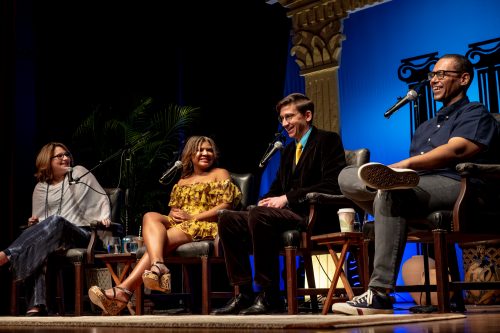 The structure of this panel — the first to explore graphic novels in the festival’s history — was, as moderator Meg Cabot described it, “very loose.” Meg began by asking panelists why graphic novels are experiencing such a surge in both quality and popularity, but this quickly shifted into a discussion about the difference between graphic novels and comics, led by Eric Shanower. As he explained, while people are often quick to ascribe higher literary aspirations to graphic novels, ultimately, the only real difference is that comics are shorter, and graphic novels have spines so you can put them on a bookshelf.

Victor LaValle then compared the rise of the graphic novel to the rise of speculative fiction, theorizing that its increased presence is a function of people who grew up on comics finally being in positions of literary power.  Danielle Page also spoke about the increasing presence of comics in the zeitgeist and the ways in which the current popularity of comic book movies contributes to their proliferation.

From there, Meg steered the conversation to the panelists’ relationships with comics during childhood. Danielle spoke about her fondness for Archie and her current love of the TV show Riverdale.  Eric gave a detailed account of the way his tastes in comics evolved, demonstrating an encyclopedic knowledge of the genre and discussing everything from the Tin Tin to Casper to Captain Marvel comics from the 40s. Victor’s love of comics started at the spinner rack at a store where the proprietors would allow him to read the comics without having to pay for them. As such, he essentially grew up reading whatever they had in stock. When given the choice, however, he gravitated towards stories with horror elements or “big, over-the-top violence and sex,” which elicited laughs from the audience.

The panelists also discussed the diversity inherent in graphic novels and the current push by librarians to use them to engage reluctant readers.  Meg shared that, as a former reluctant reader herself, comics played a role in helping her fall in love with books.  This transitioned into a discussion about how the collaboration between writer and artist requires a release of control that can be uncomfortable but can also lead to a synergistic relationship wherein the artist is able to produce images that not only compliment but also enhance, and in some cases condense, the text.

Following this discussion, Meg asked the panelists if they had encountered fans of the source material who were angered by the deviations they made from the original texts. Victor discussed the fact that some readers complained he had made Frankenstein political, and he “was okay with that because the only people who could think I’d turned it political were people who’d never read the [original] book.” Danielle was actually encouraged to think about using a pen name because her editor thought there might be so much backlash to her book (in which Dorothy from Wizard of Oz is turned into an antagonist), but to her surprise the response has actually been very positive. Eric shared that he did have to deal with pushback regarding his graphic novel about the Trojan War, mostly from archeologists who “turn up their nose” at the idea of their work being included in a comic book.

The session concluded with a series of questions from the audience that allowed the panelists to dive deeper into the collaborative relationship between writer and artist.  Following the session, I found myself returning to Meg’s original question about the rise of the graphic novel. While it’s impossible to pinpoint the precise reason for its elevation in status, with writers like these working to advance the genre, I have no doubt this rise will continue.

Amber Karlins holds an MA in Drama from Tufts University and is an instructor of English, theatre, and film at Lake-Sumter State College.  She is also an award-winning screenwriter, produced playwright, and contributing editor at The Heroine Collective, an e-magazine dedicated to exploring extraordinary women throughout history.