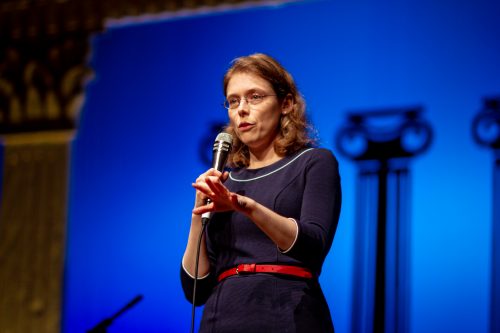 Madeline Miller set the tone for her lively discussion, “Writing Back to Homer,” when she grasped the microphone, strode to the middle of the stage, and said she could not abide being stuck behind a podium.

She started with a short passage from Circe where Odysseus asks the nymph why she turns men into pigs. The passage ends with Circe’s wry claim that “the truth is, men make terrible pigs,” which garnered hearty laughter from the audience. The same erudite, affable, and humorous style continued throughout the 45 minutes that Miller occupied the stage.

She talked about her introduction to Homer at age five when her mother read from The Odyssey–and her excitement in 8th grade when she finally had her own copy to annotate (she recently reread her marginalia and called it “embarrassing.”)

However, Miller also recalled her disappointment in realizing how few female characters there are in the epic and how they are defined by their relationships to men as mothers, wives, and sisters. Circe, by contrast, is powerful and has agency; yet, Miller claimed Circe has been largely misinterpreted as a villain–incorrectly lumped in with the tale’s female antagonists.

To support her point, Miller observed that Circe gives Odysseus and his men space to heal as well as provisions and detailed advice regarding navigating the underworld, in contrast to Calypso (often confused with Circe), who holds Odysseus against his will. And unlike Medea and Clytemnestra, Circe is not punished for having power.

However, the key initial meeting between Odysseus and Circe ultimately disappointed the 8th grade Miller. At the critical moment, Odysseus pulled out a phallic sword, and Circe immediately dropped to her knees, begged for mercy, and invited him into her bed.

This disappointment, Miller said, was the seed of her novel.

In her re-imagining of the story, Miller takes Circe, who only had a cameo of 2+ books in the original epic, and inverts the story; in her version, Odysseus instead becomes the secondary character who only gets 2+ chapters. Miller’s retelling answers the questions: where does Circe come from? What happens after Odysseus leaves?

To fill in the blanks, Miller used hints from Homer, like the claim that Circe is a “Dread goddess who speaks like a human.” She also extrapolated from small moments in The Odyssey, like the mention of Circe’s braided hair. Of course she braids her hair; she tramps around in the woods collecting herbs, making braids practical. Miller also consulted other texts and myths to flesh out detail. Shakespeare’s “Troilus and Cressida” and Tennyson’s “Ulysses” provided key source material that led Miller to contemplate Telemachus and Penelope’s stories and how difficult Odysseus would be to live with. In “Ulysses,” for example, Odysseus calls Telemachus and Ithaca boring and Penelope his “aged wife.”

Because epic poems concern themselves with traditionally male themes of patrimony, war, fate, and vengeance, Miller wanted to address issues normally excluded, such as childbirth and weaving. For example, when given an opportunity to pen the minotaur’s birth, as a writer you are obliged to take it. And, she observed, few classical tests would pass the Bechdel test.

During the Q&A, Miller reiterated her desire to transform the fleeting female appearances in The Odyssey and other texts into fully realized views of the often elided women of the classical world.

Genevieve Morgan teaches 9th and AP English at Flintridge Preparatory School. She holds a BA from UCLA and a Ph.D. from UC Davis in English.