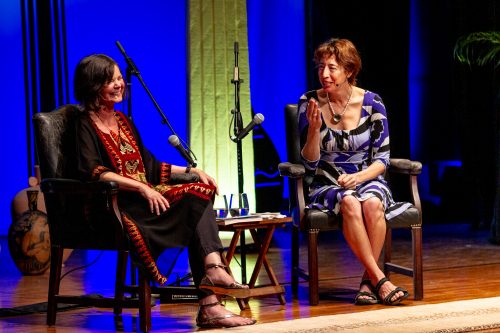 Neither Geraldine Brooks nor Nicole Galland started off with aspirations to write fiction.

After holding the pages of a hot-off-the-press newspaper as a child, Geraldine Brooks pursued a career in journalism for several years and with much success. This phase of her life came to a screeching halt when she was detained by Nigerian secret police. “I thought about how long other journalists I knew had been detained,” she said. “Some up to eight years. Then I thought: I have to get pregnant.” Along with her intellectual curiosity, her desire for more stability and a better environment in which to build a family led her to a career as a historical novelist.

Nicole Galland, who describes herself as a “control freak,” began as an actor—but, she realized, actors have no power over what they say, with whom they perform, or, in many cases, which roles necessity forces them to take, and so she became a stage director. But there was still another problem: She couldn’t know whether the final product of the play would align with her vision. She thought she would have more control as a movie director.

You see where this is going: Eventually, she embraced the role of  a novelist who has complete control of her characters. She went from method acting to method writing, she said—a move emphasized by the fact that for her novel Godiva, she actually rode naked on a horse.

“And how did it feel?” Brooks asked her.

It should be unsurprising, then, that two artists who have undergone such personal transformations should have, at the heart of their writing, literary transformations. Much of both of their work starts with a simple question: What would that be like? What ‘that’ is varies widely, but the sense of curiosity remains.

Brooks and Galland ended their conversation by acting out a scene from Othello—twice. In the first rendition, they played the characters of Iago and Emilia according to the traditional view that they have an unhappy marriage. In the second rendition, they challenged that convention and showed that the same words played differently could, in fact, reveal a playful, even passionate marriage. This exercise in contrast provided a perfect illustration of what Galland called “the malleability of the source material”: how literature, history, and even personality are forever open to revision and re-interpretation.

Ross Feeler’s novel-in-progress TARSH won the 2019 Marianne Russo Award from the Key West Literary Seminar. His writing has appeared or is forthcoming in Electric Literature’s Recommended Reading, The Potomac Review, Story|Houston, New South, The Common, and others.