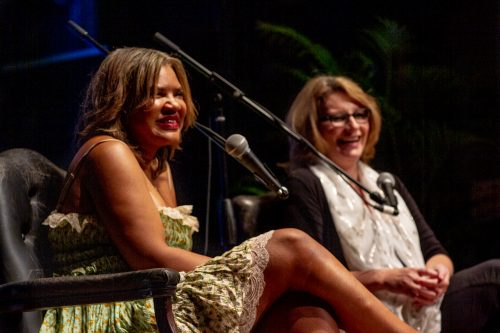 Meg Cabot and Danielle Paige opened the first public session of the 37th annual Key West Literary Seminar with a confession: “We are both guilty,” Cabot claimed, “of writing books based on other books.”

The authors began their lively conversation by sharing early influences and favorite childhood characters that sparked their interest in writing about strong women before taking questions from the audience. Classics like Jane Eyre, the Nancy Drew series, and authors Judy Blume and Jane Austen topped the list. They also described a shared appreciation for Star Wars princess Leia Organa, due to her fierce ability to wield a blaster and run a government.

Both Paige and Cabot also expressed a fondness for the romance genre, defending its legitimacy as one of the top sellers in the publishing industry. Paige shared some of her memories of “sneaking into her mom’s room” to find titles like The Thorn Birds and indulging in the vampire love stories of Anne Rice. The two praised romance genre queen Jude Deveraux as well.

While some of their early influences featured strong female characters, the authors expressed a desire to write about girls who are strong and independent. Cabot lamented her frustration with the 29 rejections received for the best-selling Princess Series because her main character didn’t want to be a princess; publishers didn’t like that Mia enjoyed her life and didn’t need to be rescued.

“That is the complete opposite now,” chimed Paige. She noted that sometimes it is important to just read for fun, without learning a lesson.

Cabot also made a point to clarify to the audience that young adult fiction (YA) is not a genre, but a category of children’s fiction; there are many genres that exist in YA.

Both are currently working on graphic novel projects featuring female superheroes for DC Comics. Cabot is writing an origin story for Black Canary aimed towards younger audiences, while Paige is working on a graphic novel about Meera. “I like to say that Aquaman is HER boyfriend” stated Paige, showing the importance of Meera standing as her own character, rather than one dependent solely on association with the male superhero. Cabot chose to write about Black Canary because her superpower is her sonic scream: “She’s very loud.” Cabot emphasized that women are often chastised for being too loud, for talking too much, so she is excited about depicting this as a superpower for Black Canary. Both expressed enthusiasm for having the opportunity to create female characters in the male dominated comic industry. “It’s so great to be included and invited to the party as a woman, and as a woman of color” added Paige.

While the graphic novel format is new territory for both authors, they described the experiences that prepared them for this type of project. Paige compared graphic novel writing to her role as a scriptwriter for Guiding Light, providing the story and a description of the vision, while leaving the actor or artist to interpret it. Cabot also added that “they give you the script back with the art the way you asked them to draw it and you have to fill in the bubbles.” This has been challenging for her, especially since her graphic novel about Black Canary is intended for a younger audience; fewer/smaller bubbles make it difficult to simplify the text to fit.

Several of the questions posed by the audience referred to male readers and how much they read about strong female protagonists. Both authors stressed the importance of the cover in determining who would select a book. “A pink cover doesn’t work for boys,” said Cabot in reference to Princess Diaries. Paige agreed, noting that boys often read Dorothy Must Die in part because of the black cover and they red slasher font. Paige also stressed the importance of teachers and librarians putting the books in their students’ hands. Cabot added that there is a genuine attempt in the publishing industry to make the covers more gender neutral so that they reach a broader audience, especially with the graphic novels/comics, but for some reason, Princess Diaries is still pink.

Through their animated conversation, Cabot and Paige shared their passion for writing about strong female characters because they too are girls who want the world to see girls depicted honestly: strong, resourceful, and intelligent, rather than always needing to be rescued.

Diane Hance is the librarian at Grisham Middle School in Austin, Texas, an IB World School. She is a National Board Certified Educator and is currently serving on the Lone Star Reading List Selection Committee for the Texas Library Association.