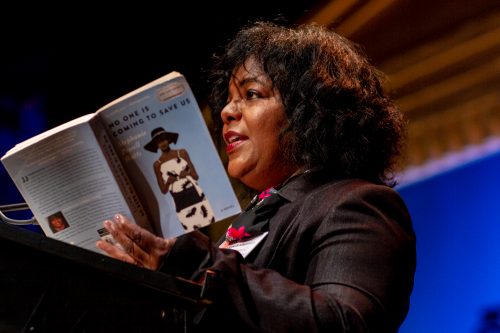 “This summer my goal was to read all of James Baldwin’s works,” Stephanie Powell Watts told the audience at the Key West Literary Seminar. While reading Go Tell It on the Mountain, she came to the section where Baldwin speaks of when he was five and his mother said, “I have an idea,” as she was holding a scrap of black velvet. For the longest time Baldwin thought an idea was a piece of black velvet. “And it made me think,” Watts said, “of how influential we are on each other throughout our lifetimes.”

No One Is Coming to Save Us, Watts’ acclaimed novel, is about a desperately poor family in NC who are black. With this book, as in The Great Gatsby, Watts was interested in exploring the desperation of people longing for the past, people who return home with an irrepressible drive to prove themselves to those who shaped them during their formative years, people who will go to desperate lengths to find their place in the world and not be outsiders.

“We use stories to explain ourselves to ourselves,” Watts said, to reinforce our shared humanity. “To fill in gaps of what we know with each other.” She shared a section of No One Is Coming to Save Us, in which the character J.J., who grew up desperately poor, has returned to the community that sheltered him and where he is now building the grandest house in town.

Watts spoke of how she was interested in hidden histories as a child, not just the stories of happy endings and resilience, but the stories which were “paved over in whispers.”

“If you deny the past, it will come back to haunt you,” she added, reminding us of her character J.J., Jay Gatsby, and maybe just also a bit of ourselves.

Deirdre Sugiuchi is finishing her fundamentalist Christian reform school memoir, Unreformed. She lives in Athens, GA with her husband and son, where she’s also a public school librarian.