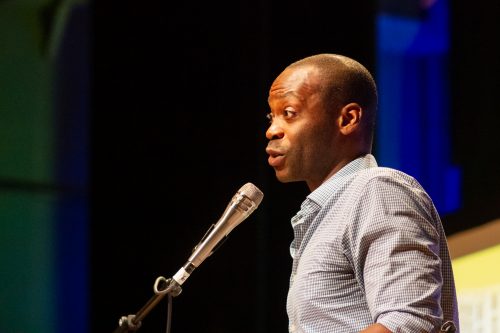 For the past four years, the Key West Literary Seminar has been spiriting one of its esteemed authors away from the Friday morning session to speak to students at Key West High School during their third period. First Junot Díaz, then George Saunders. Last year, Jamaica Kincaid, and this time Rowan Ricardo Phillips with a talk entitled, “I’d Love to Change the World: What We Talk About When We Talk About Writing.”

Phillips began by asking students how far they have to travel for sporting events, debates, and the like, a pragmatic quandary that had occurred to him as we pulled into the parking lot past the totem of the fighting conch. A brief meditation on island life followed – the beautiful sea to stare at, occasional boredom, the wonders of taking flight and crossing bridges. Phillips deftly connected the quotidian necessity of traversing between and across with reading and writing. What goodness do these acts of communication over seas of time and space produce in the world?

“Empathy,” he said, “is the bridge between the self and others.”

Phillips gazed at the crowd and explained that visiting schools is always an act of coming back; “I’ve been you,” he assured.

The poet was addressing a crowd of more than 200 students, mainly juniors and seniors in AP English classes from Key West and Marathon high schools, young people likely anxious to know who they are and where they are headed in life. However, he cautioned them against ascribing to any too fixed notion of identity: “You were made to change. You are an organism of cells, perpetually created and dying, made to become, and to transform.”

Shuttling between the North Bronx and the Upper East Side for school, Phillips described the younger iteration of himself. He was into basketball and baseball. He played guitar and wrote songs, and only incidentally read a lot, with the snippets of Shakespeare his mother would recite at home in the background, but still he espoused no identity as a writer.

Even as “studying got hot,” he said, and there was less time for practicing with his band, he kept writing what he called songs until one day he realized he couldn’t stop writing poems.

Discouraging a rigid sense of self, Phillips instead encouraged the students to explore who they are in language, and to realize that “what you do is who you are.” Before reciting the poems “Proper Names in the Lyrics of Troubadours” and “Mare Incognitum,” among others, he suggested, “Explore your routines, whether dull and flat or vibrant and enhancing. Think about the way you make meaning in the world. Start with your name, that strange inheritance – the way those syllables move have marked you. Everyone should write about their name and their mother.”

“Spend time with words,” he added later. “Face the inchoate, unclear aspects of yourself. Find the edge of its beginnings.” He reminded them how “in American history there is that tragic understanding” — expressed in the prohibition of reading and writing for enslaved people — “that to read and to write is the first and only bridge to freedom.”

Throughout his time with the students, Phillips was encouraging and positive about their generation’s potential to make great art. He assured them that their comfort with satire, the mashup and the remix, their access to so much, and their innate comprehension of genre will be fruitful influences on their identities as makers of art. One student, mildly incredulous, prompted him to address the darker side of what he called the “technocracy” they live in. “But what about how social media inhibits our ability to think for ourselves?” she said. “Watch what I’m about to do,” he responded. He turned the screen of his phone to the audience, swiped to power it off, and tossed it behind him. He empowered them to set the boundaries: “Deal with something on your own terms. You choose,” he said with a smile.

As some students lingered after the bell, including several alumni of the first KWLS Young Writers Studio, Phillips continued to shower them with good advice and ideas that they will hopefully share with a wider audience in the school’s newspaper, The Snapper. He told them to be open to other languages and to explore the exercise of translation: “Acts of translation are gestures toward a different sense of yourself; bridges to us being better.” He also fielded questions about his relationship to sports writing as well as his style, which he said, if he had to describe it, is, “hopefully evolving. I am just interested in making. Poesis is Greek for making. I am just interested in finding the right word in the right moment.”

Saturday morning, in his dazzling talk entitled “Therefore All Seasons Shall be Sweet to Thee: On Literary Influence and the Power of Prophesy,” as Phillips mentioned how a student had asked him about his influences, I looked across the upstairs viewing room and saw AP English student, Darrek Gutierrez. (The seminar provides three free passes for the high school each year). Afterward I asked him what he thought of the talk, and he said, “I really liked the thing he said about the ‘confidence of the therefore’” referring to Phillips’ discussion of the turn in Coleridge’s “Frost at Midnight.” He continued, “I was actually the one who asked him about his influences.” Darrek and his classmates spent the first few days of the new year studying the first 11 poems in Phillips’ collection, The Ground, and they are currently working on poems about their own names and the events in their lives that are beyond the reach of memory, writing prompts KWLS designed to accompany the introduction of Phillips’ poems. Darrek said, “That poem ‘Tonight,’ it really got me. I had never read anything like it.”

I asked The Snapper reporters what resonated with them most from their interview with Phillips. They loved when he called high school, “A covert preparation for a more overt action,” quoting Ralph Ellison. Clearly, as high school seniors, it made them feel energized about the futures awaiting them this May. But he also said, “Now is the time to widen your base, fill your toolbox with music, art, biology, whatever you love, and discover both your root and your route.” KWLS is dedicated to creating programming for young people that will aid them in their journeys of self-discovery through reading and writing.