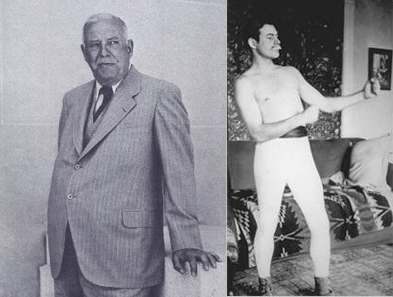 I first heard of the fist-fight between Ernest Hemingway and Wallace Stevens in KWLS co-founder Lynn Kaufelt’s book, Key West Writers and Their Houses. It didn’t ring quite true, somehow, and yet the story’s skeleton alone begged frequent repetition. Hemingway, man of action and hard drinking, fan of violence in so many forms, and Stevens, cerebral, executive, ironic: each gave as much to American writing in the 1930s as any. That they both spent considerable time that decade in tiny Key West was improbable enough. That they actually came to blows over their no-doubt-innumerable differences was gravy, perhaps a fiction but, with apologies to Wallace, a supremely pleasurable one.

It turns out the story is true. Let’s let Hem tell it:

February, 1936
“Nice Mr. Stevens. This year he came again pleasant like the cholera and first I knew of it my nice sister Ura was coming into the house crying because she had been at a cocktail party at which Mr. Stevens had made her cry by telling her forcefully what a sap I was, no man, etc. So I said, this was a week ago, ‘All right, that’s the third time we’ve had enough of Mr. Stevens.’ So headed out into the rainy past twilight and met Mr. Stevens who was just issuing from the door haveing just said, I learned later, ‘By God I wish I had that Hemingway here now I’d knock him out with a single punch.’

“So who should show up but poor old Papa and Mr. Stevens swung that same fabled punch but fertunatly missed and I knocked all of him down several times and gave him a good beating. Only trouble was that first three times put him down I still had my glasses on. Then took them off at the insistence of the judge who wanted to see a good clean fight without glasses in it and after I took them off Mr. Stevens hit me flush on the jaw with his Sunday punch bam like that. And this is very funny. Broke his hand in two places. Didn’t harm my jaw at all and so put him down again and then fixed him good so he was in his room for five days with a nurse and Dr. working on him. But you mustn’t tell this to anybody.”

The story is confirmed by Stevens’s biographer Joan Richardson, who reports that Stevens returned home to his wife and daughter in Hartford that March with a still-puffy eye and broken hand, and that Stevens himself told versions of the story throughout his life. It’s Hemingway’s, though, that survives:

“Anyway last night Mr. Stevens comes over to make up and we are made up. But on mature reflection I don’t know anybody needed to be hit worse than Mr. S. Was very pleased last night to see how large Mr. Stevens was and am sure that if I had had a good look at him before it all started would not have felt up to hitting him. But can assure you that there is no one like Mr. Stevens to go down in a spectacular fashion especially into a large puddle of water in the street in front of your old Waddel Street home where all took place. … I think he is really one of those mirror fighters who swells his muscles and practices lethal punches in the bathroom while he hates his betters.”

Hemingway implies elsewhere a familiarity with Stevens’s poetry, and in a way his characterization of Stevens is not as unkind as it may seem. After all, Stevens was in his late fifties when the fight took place, Hemingway his thirties. Would Stevens, the author of such poems as “Poetry is a Destructive Force,” “Men Made out of Words,” and “The Good Man Has No Shape,” have objected to a characterization of himself as a “mirror fighter” practicing “lethal punches in the bathroom?” I think he’d rather chuckle at the shape of this image, see in it a metaphor for his work, and collect enjoyment life-long from this most unlikely of modernist battles.