When Frank Bruni was named restaurant critic for The New York Times in 2004, he was unknown to the food world. As a journalist at the Detroit Free Press and the Times, he was praised for his investigative reporting of the sexual abuse scandal in the Catholic Church and his coverage of Governor George W. Bush’s presidential campaign. But his surprise appointment to this apparently enviable job– paid to eat in a city known for excellent restaurants– was to be, for deeply personal reasons, the greatest challenge of Bruni’s life.

In Born Round (2009), Bruni’s third book, he details the life that lent such irony to his tenure as the country’s most notorious arbiter of culinary taste. As a child, judging from the book’s many pictures, he was just slightly chubby. But in an Italian-American family obsessed with food as a symbol of status and celebration, he was clearly the most obsessed, devouring plate after plate of all that was available. With age came an additional obsession: his body and its perceived attractiveness to other men. Bruni attempts just about every fad diet that comes along and, in college, experiments with bulimia, a dangerous trick that allows him to have his cake and not eat it too. All the while, as the pictures tell, he’s still not that fat. But by the end of the calorie-fueled Bush campaign, Bruni is in his late 30s and, indeed, significantly overweight. Decades of withering self-criticism have finally found an ample target.

Bruni begins to get a handle on his weight just before the Times makes its tantalizing and terrifying job offer. As restaurant critic, he will be required to eat everything on the menu at all of the city’s best restaurants, occasionally eating dinner twice in one night, and always returning to a given restaurant multiple times before writing the reviews that will earn him admiration, envy, and scorn. In restaurant- and media-mad New York, getting through these meals undetected requires constant subterfuge; high jinks ensue as maîtres d question Bruni’s false identities and chuckle at his sometimes clumsy disguises. By the time this entertaining masquerade is through, we’ve begun to see what we hope is the real Frank Bruni: a man at peace with his urges, appetites, and even occasional binges, a battle-tested and levelheaded adult, practiced in the fine art of self-forgiveness.

Frank will join us in Key West this January for The Hungry Muse, and we had a chance last week to ask him a few questions. Here’s how it went:

Littoral: What have you been up to since Born Round?

Frank Bruni: I write full-time for The New York Times Magazine, and remain a Times staffer, which I’ve been for some 15 years now. Yikes, I’m old! From that position I get to wander through the paper a lot: I recently did a huge Dining section piece on the restaurant Noma in Copenhagen, and I write a column on drinking and bars called the Tipsy Diaries for the Weekend section on every other Friday. For the magazine I specialize in profiles: over the last six months I’ve written about the Massachusetts Senator Scott Brown, the television doctor Mehmet Oz, and Carly Fiorina, the business pioneer running for Senate in California.

L: Were you surprised by the notoriety you found during your tenure as restaurant critic for The New York Times? Had your predecessors– Ruth Reichl, Bryan Miller, William Grimes– found the same level of celebrity? How would you say your time at the Times was different from theirs?

FB: I wasn’t surprised by the notoriety, precisely because that sort of notoriety, or at least a high public profile, seemed to go with the job. It was clear to me from what Bryan and Ruth and Biff (that’s what Grimes goes by) had gone through that The New York Times restaurant critic was a lightning rod for criticism, a magnet for chatter, a source of public fascination. I braced myself for that.

What was significantly different about my tenure was that it was the first to come along when the blogosphere was truly full-blown: when web sites analyzed the critic’s every word publicly and in real time. Eater.com, for example, did a “BruniBetting” feature– they now have something similar with Sam Sifton– that guessed how I’d rate a restaurant by deconstructing my sensibilities and approach through time. That sort of thing ratcheted everything up a bit. 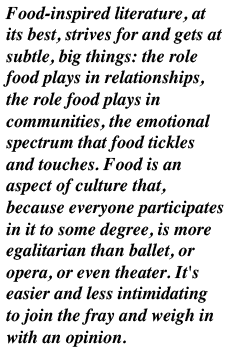 L: Do you think this rapid-response media environment has a discernible effect on food and the culture around it? Is the way we’re eating now affected by the way we create and consume information online?

FB: All the instant blog attention to new places can sometimes mean several things. Restaurants pay more attention to the way they come out of the gate than the way they’ll mature and stabilize and endure through time. Restaurants that come out of the gate wobbly may never get a chance to recover: the naysaying and catcalling on a myriad of web sites threaten to do them in. And restaurants with a ready-made curiosity factor– because they’re participating in a growing trend, because they have a chef who just got TV time on a reality show, or because they have a flashy gimmick– sometimes get more attention than they deserve, because they’re able to hog the blogosphere, which needs quick and easy and instant items. Blogs aren’t different from traditional media that way, but they’re like traditional media on steroids, traditional media on a sugar high. The buzz is louder and more pervasive than in the past, and I think it leads people in the buzziest directions. Dining out has become more faddish as a result.

L: As the Times‘ “Tipsy Diarist,” you’ve turned your focus to cocktails– a job that would seem to have sometimes painful consequences. Did you have any concerns about taking on this assignment? What’s your hangover remedy?

FB: I do the Tipsy Diaries only once every two weeks, and that limits how much drinking-around-town research I need to do. Besides which, the column hinges on interviews and the like as well: it’s not just about going out and drinking and drinking. So it’s really quite manageable. And with cocktails as with restaurant meals, FINISHING what’s in front of you isn’t necessary to evaluate it. You can sample, you can sip. I do some of that.

I’ve always enjoyed drinking, and am probably not drinking any more in the service of the Tipsy Diaries than I did before the column began. By the same token, I drink to excess no more than I did in the past. And, yes, it happens: I don’t cut myself off when I should, and then I wake up with a hangover the next morning. I’ve not found any foolproof remedy for that morning-after hangover. But I’ve found, through the years, that if I pound water before bedtime, making myself drink glass after glass after glass, and take three ibuprofen pills, the morning hangover is milder than if I don’t do those things.

L: Food has quite a grip on pop culture these days– from cable channels to iPhone applications to movies to bestselling books. Why do you think people care so much about it?

FB: I think it’s largely a confluence of two things: we’re a society in which enough people have been prosperous long enough that we can lavish money, attention, etc., on food; and that arc in our national story has met a media-frenzy culture in which anything that’s hot becomes ultra-hot and then some temperature even beyond that. Also, food is an aspect of culture that, because everyone necessarily participates in it to some degree, is more egalitarian than, say, ballet, or opera, or even theater. It’s easier and less intimidating to join the fray and weigh in with an opinion.

L: There’s also writing about food that rises to the level of art- your book, Jonathan Gold’s Pulitzer Prize-winning criticism, Harry Mathews’s hilarious “Country Cooking from Central France.” How are such literary explorations of food different from the shows on the Food Network?

The first: it uses food as a prompt and prop for conventional drama and soapy narrative, for example the elimination competition shows. The most artful of those, like “Top Chef,” wind up teaching people a lot about food and tapping people’s fascination with fine food. But the ultimate pull is the episodic, suspenseful story.

L: Did you have a literary model in mind when you set out to write Born Round?

FB: For Born Round I was less influenced, I think, by the food memoirs I read– and I’ve read many through time, simply because it’s a genre I’ve always gravitated to– than by other sorts of memoirs. I remember being impressed and feeling challenged by the pacing and energy of Augusten Burroughs’s Dry. I thought there was a joy and, again, an energy in Elizabeth Gilbert’s Eat, Pray, Love that were instructive. The elegance of Frank Rich’s memoir, Ghost Light, was a sort of ideal and goal. But I ultimately knew that I was cobbling together something that didn’t have a clear referent: Born Round is at once an addiction memoir, a food memoir, and a more general memoir that mines the prevalent themes of family and self-acceptance. In fact I think its predominant flaw is a sort of hydra-headedness. Ah, well. I gave it the best shot I could.