Australian-born writer Geraldine Brooks is the author, most recently, of People of the Book (2008), a novel about the stories uncovered during the conservation of the sacred Hebrew text known as the Sarajevo Haggadah. Her previous novel, March (2005), was awarded the Pulitzer Prize for fiction. As a journalist for The Wall Street Journal in the 1980s and ’90s, she covered crises in the the Middle East, Africa, and the Balkans. Her husband of twenty-four years is fellow Pulitzer Prize-winner Tony Horwitz. Both Brooks and Horwitz will join us in January 2009 for our twenty-seventh annual Seminar, Historical Fiction and The Search for Truth. Brooks will deliver the keynote address to open our first session.

Our conversation with Brooks begins with March, which tells the story of Captain March, known to readers of Louisa May Alcott’s Little Women as the character of the father and husband who has left the family to fight in the Civil War. Brooks based her Captain March upon Bronson Alcott, Louisa May’s real-life father, whose surviving letters and diaries reveal a close friendship with Ralph Waldo Emerson and Henry David Thoreau. The fictional character of Captain March therefore develops alongside two founding myths of American history- the abolitionist cause during the Civil War and the intellectual currents of Concord, Massachusetts- while also providing an imagined backstory to a classic of American literature. The literary risks of such an imaginative weaving of truth and fiction are great. The reward of the Pulitzer, America’s top literary honor, rarely given to a foreign-born writer, is proof of her exceptional talent. Brooks talks about this book and her love for books; about Christopher Walken in The Dead Zone; the “Tony Test,” reading in the bath, and ordinary, everyday Geraldine.

Littoral: When you had finished with March, did you imagine it would meet with such success?

Geraldine Brooks: Of course not! You’d have to be delusional.

L: How did you feel about it, in that interim before public reception?

GB: I think with any book, there’s an odd period when you’ve had to let it go. You’ve pushed the deadline and your editor’s patience to the end, and you have to stop revising and tinkering. Then, alarmingly, it’s out of your hands. There’s a kind of nervous uncertainty: could I have done better? Will someone, anyone, want to read it?

L: In an interview with Dave Weich, you said, “As a reporter, if you don’t know the truth, you can’t write it, but in fiction you can make it up.” I think that “make it up” part bothers some readers of historical fiction. Have readers been duped, who believe they know the history better after reading historical fiction? How does historical fiction contribute to our understanding of history? 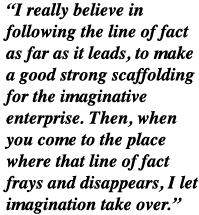 GB: It’s nothing to do with duping. It is the novelist’s job to imagine, and my implicit contract with the reader is clear enough: This is a novel; I hope you enjoy the fruits of my imagination. I think if you call it a novel, you can do what you like, but you need to explain later what it is that you did. I believe the least one can do is offer an afterword, setting out where the facts end and the fiction takes over.
Through the vehicle of story, I think it is possible to lead reluctant minds to consider our earlier selves. People who would not pick up a narrative history book will perhaps pick up a novel and find their interest engaged by predicaments from the past. I really believe in following the line of fact as far as it leads, to make a good strong scaffolding for the imaginative enterprise. Then, when you come to the place where that line of fact frays and disappears, I let imagination take over.

L: Your husband is a fellow Pulitzer-winner, and is also an author of a well-received book on the Civil War. We’re looking forward to having you here together in January. To what extent do your literary interests and convictions overlap? To what extent do they differ?

GB: We started out as newspaper reporters together, united in the service of fact. Tony continues to write factual books; he says I’ve “gone over to the dark side,” as he puts it, “making stuff up.” He’s an enthusiastic reader of fiction, though, so that makes him a great first reader for me. He’s very impatient– if a novel doesn’t grab him he won’t keep reading. That’s helpful to me: to see if my early drafts can pass the “Tony Test.” During our long marriage, we seem to have managed to drag each other towards our respective interests. He brought me around on the Civil War; I turned him on to the wonders of international travel.

L: As a writer married to a writer, do you always think of yourself as a writer? Or is there still another self, an ordinary, everyday Geraldine? 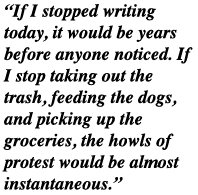 GB: There’s definitely Schlepper Geraldine. And, to be honest, she’s a much more important person in the world than Writer Geraldine. If I stopped writing today, it would be years before anyone noticed. If I stop taking out the trash, feeding the dogs, and picking up the groceries, the howls of protest would be almost instantaneous.

L: I admire that sentiment very much. But, don’t you hope for a lasting literary reputation? Did your career as a journalist inure you to good writing and hard work being taken out with the trash?

GB: I hope people will read and enjoy my books, that’s it. Really. Anything else is just delectable gravy.

L: One result of the real-life conservation project that is the subject of People of the Book, is that much of the Sarajevo Haggadah has been digitized, and can be seen on the web. How do you feel about more mundane books moving from tactile things to things on the screen, downloaded to Amazon’s Kindle or called up in a Google Books search?

GB: I think there’s a place for e-books– for environmental reasons there probably has to be. But I would hate to live in a world where paper and ink were completely obsolete. I like to read in the bath, for one thing: it’s a favorite indulgence. Hot water, a little lavender oil, and a great book … ahhhh. You couldn’t do that with a digital reader.

L: Your fondness for the material “stuff” of literature is unmistakable. In March, for instance, when we first meet Henry Thoreau, he is not yet the noted thinker, but a relatively humble inventor “who had developed a scheme for the manufacture of a better pencil.” And People of the Book– well, perhaps its title (and its dedication: “for the librarians”) says it all. Can you talk a bit about your bibliophilia?

GB: Books were huge in our family. We didn’t have a lot of material things, but we always had books. They were like food and clothing– necessities. We used the local library a lot, but my dad was also fantastic at finding beautiful editions of classics in used bookstores, so as children my sister and I had lovely libraries of our own. These tended to be books by English children’s writers: Enid Blyton’s The Valley of Adventure was the first book that absolutely transported me. I loved Paul Gallico’s Scruffy and The Snow Goose, and Kathleen Hale’s wonderful illustrated Orlando the Marmalade Cat books were early favorites. It was much later that I started to read books set in my own Australian environment and reality, such as Ivan Southall’s Ash Road.
I love my books. I love to have hardback copies of books I admire and I take great pleasure in the look and feel of them.

L: In approaching March‘s subjects– great readers and writers of books– what did you gain from having a hands-on experience with the very editions they may have held?

GB: It was like the Christopher Walken character in that movie of the Stephen King novel (The Dead Zone), where he touches someone and suddenly the score goes all dissonant, and he winces like he’s holding a high tension wire. It felt like that, but in a good way. To use an outdated expression: it was very trippy.

L: What can we look forward to in your keynote address this January?

GB: A fair bit of ranting and raving about the importance of storytelling. Also the best glimpse I can give into my so-called creative process, although I like what Andrea Barrett has to say about that: she says she can no sooner describe how her ideas turn into novels than her dog can explain how the dead thing she scarfed up in the park an hour ago has become the vomit on the hall carpet.