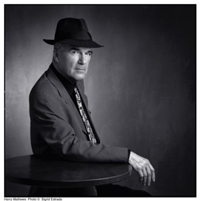 Harry Mathews is often introduced as "the only American member of the Oulipo." The introduction is obscure, as few Americans know anything about the Oulipo, and many of those who do came to it by way of Mathews. Short for Ouvroir de Littérature Potentielle, or "Workshop for Potential Literature," the Oulipo is a group of mostly French writers and mathematicians who invent constricting forms as a means of creating literature. The famous example is George Perec’s novel La Disparition, written (to the length of 300 pages) without use of the letter "e." It was subsequently translated into English, as A Void, by Gilbert Adair, also without recourse to that ever-useful letter. While the constraints gather all the attention, like an Olympic sprinter with prosthetic legs, a successful Oulipian text renders them almost beside the point. To his readers, Mathews is known first as a writer of strange and eminently pleasurable novels. None are overtly Oulipian, but each (I’m thinking of The Sinking of the Odradek Stadium, My Life in CIA, and The Journalist) is marked by sensations unfound elsewhere in literature. One suspects something is going on, that some exotic form is master of the content, before coming to the sure conclusion that Mathews is the prudent master of each.

Mathews and his wife Marie Chaix divide their time between France and Key West, where, from 2001-’04, he served as a member of our board of directors along with Irving Weinman. In 1998, Mathews, Chaix, and others celebrated the Key West marriage of Weinman to poet Judith Kazantzis. To honor their union, Mathews turned toward Perec’s Oulipian re-imagining of the Epithalamium, a traditional poetic form which celebrates bride and groom. In Perec’s version, the basic rule is that the letters used are restricted to those of the names of the betrothed. In Mathews’ 5-part Epithalamium, a further refinement was added, limiting the letters of the first section to those of the bride’s name, the second to those of the groom’s, alternating until the final section, where the letters of both names are freely mixed. It sounds complicated, and is, especially when you consider the strict alphabet of this bride, j-u-d-i-t-h-k-a-z-a-n-s, and this groom, i-r-v-n-g-w-e-n-m-a. But what results is a gorgeous rendering of two distinct, isolate, fully-composed entities, finally coming together in a union richer than the sums of each. It is a marriage of language, in other words, to celebrate a marriage of friends.

Until now, Harry Mathews’s Epithalamium for Judith Kazantzis and Irving Weinman, with collages by Marie Chaix, has been available only to those friends who attended the wedding of Judith and Irving on February 22, 1998, and received one of the ninety-three copies printed by the Grenfell Press. By special arrangement with Mathews and Chaix, we have created a digital version of the Epithalamium, following the design of the original. Click here to view the Epithalamium as a series of images in a pop-up window. Click here to download a .pdf of the Epithalamium, which will allow you to magnify text size as desired.