Billy Collins is a two-term United States Poet Laureate, New York State Poet, and the author of eight collections of poetry. With the Library of Congress, he established Poetry 180, a teaching aid for high school students founded on the belief that “poems can inspire and make us think about what it means to be a member of the human race.” His newest book, Ballistics, has spent nearly a year on the Poetry Foundation’s best sellers list, where his previous book, The Trouble with Poetry, has now appeared for more than 120 consecutive weeks.

Collins’s poetry displays a deep affection for the details of middle-class American life. His landscapes are marked by suburban parks, dogs, and country houses, and inhabited by a narrator whose idylls of contentment and quiet adventure at first appear utterly familiar. But just as these reveries come into view, they are subverted by mischievous impulses that shift the reader, as Collins says here, “from the familiar to the strange, from coziness to disorientation.”

In this interview, conducted over the course of several emails this summer, Collins talks about his poetic rivalries, the theories of John Keats and T.S. Eliot, the importance of keeping secrets in poetry, and the pleasures of disorientation in the age of the GPS.

Littoral: Which poets do you read again and again, and why? Which poet did you read last?

Billy Collins: My reading of poetry is very random at this point because I am not so much studying a particular poet as I am cruising the pages of poetry books and literary magazines looking for a poem, or even a passage, striking enough to urge me to write my own poem. What inspires poetry is poetry. So I read others not to steal but to find gates of departure for my own flights. Of course, some poets provide these more reliably than others. A few of the ones I return to often are Ron Padgett, Charles Simic, Clive James, Yiannis Ritsos, and Wislawa Szymborska. They all make me jealous, often enough to try to show them who’s boss by writing a better poem than any of them. This always fails, but at least something gets written. Did I mention John Donne and Emily Dickinson? They make me furious.

L: Did your time as United States Poet Laureate change how you think about poetry and the audience for it? How so?

BC: My overall view of American poetry and its audience did not really change during my tenure as Poet Laureate. I knew that the audience for poetry was relatively small but that there were many readers out there who had been driven away from poetry and were ready to find a way back. Something I did not realize then was the readiness of high school students to respond fully to poetry if they were exposed to the right kind of poetry. I suppose what I am really doing here is endorsing the Poetry 180 program that I put in place at first for high schoolers. I had no idea I would hear from so many teachers who found that Poetry 180 made poetry come alive for their students, some of whom actually demanded to hear more poems. For me, making the poems available on the Library of Congress website was setting out the water; I had no idea so many horses would come to drink. And I mean “horses” in the best sense of the word!

L: One pleasure of your poetry is the way it cuts through the ceremoniousness of capital-‘L’ Literature. In Ballistics, for example, you spoof well-known lines of poets including Wallace Stevens and Robert Frost. How much should younger readers and writers respect established literary elders like these, and how much should they try to have a more irreverent experience? 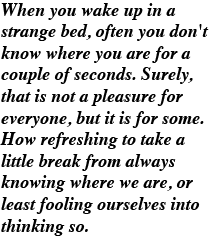 BC: I wouldn’t advise coming right out of the box and ridiculing your betters. But if you think you have learned enough from a teacher, you seize the opportunity to signal their current uselessness. Any poet I have parodied or poked fun at– O’Hara, Frost, Stevens– I have been in awe of at one point. But for every poem I have that pokes fun at a poet or poetry itself, I have at least another poem that pokes fun at me. I am critical of poetry because I often suspect its intentions, and I am leery of the easy elevation of poetry into an empyrean condition. The clay feet of every artistic endeavor need to be kept in mind.

L: I tend to think that what sets poetry apart from prose is a certain density of language, making it relatively difficult to decipher. Your poetry, on the other hand, is praised for being easy-to-read and readily accessible. What do you hope a reader will find in your work the third or fourth time around?

BC: “Transparency” has become a popular word recently in all sorts of areas, usually in the sense of revealing secrets. A good poem, no matter how plain the language, will always have a little secret it is not telling us; and that, it could be said, is what makes poetry different from prose. What both genres have in common is diction and syntax. I tend to use a simple diction (few trips to the dictionary) and straightforward syntax (I write in sentences). But as the poem moves ahead, I am trying to nudge it into somewhat mysterious or at least hypothetical territory. The experience of reading the poem should contain a feeling of shifting (or being shifted) from the familiar to the strange, from coziness to disorientation. To reread the poem would be to re-experience that shift. In just about every poem of mine, we know exactly where we are in the opening lines, but I would argue that explaining where we are at the end would present more of a challenge.

L: At the end of your poem “Evasive Maneuvers,” you look up gastropod in the dictionary and then hide in the woods, as if fleeing from the definition’s certainty. This reminds me of John Keats’s praise for “being in uncertainties, mysteries, doubts without any irritable reaching after fact and reason.” What is it about mystery and disorientation that is so appealing?

BC: For disorientation to be a pleasure– an odd concept in the age of the GPS– one has to feel relieved to let go of the helmet of opinions we tend to wear every day. Keats thought poets should have no character so that they could become other characters and make intimate connections with the world that lies beyond the self, which would include, in his case, nightingales and Grecian urns. T.S. Eliot thought the poet should be lacking in “personality,” perhaps for similar reasons. I write to give myself pleasure, and that includes not knowing exactly where I am at the end of a poem. It reminds me now of that Chet Baker song “Let’s Get Lost.” When you wake up in a strange bed, often you don’t know where you are for a couple of seconds. Surely, that is not a pleasure for everyone, but it is for some. How refreshing to take a little break from always knowing where we are, or least fooling ourselves into thinking so.

Listen to a reading by Billy Collins at the 2003 Key West Literary Seminar in our Audio Archives. Join Collins in in Key West January 7-10, 2010, for “Clearing the Sill of the World.”