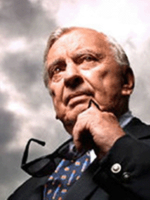 When the 2009 Seminar begins, we will have elected a new United States president. For the sake of the children and the delicate-eared in our audience, let us hope it is Mr. Obama. Because panelist Gore Vidal will probably have something to say about the president-elect, and it may not be nice. Last week, he called Hillary Clinton "more or less insane." This week, in an interview with Mike Sager at Esquire.com, he assesses presumptive Republican nominee John McCain:
I’ve developed a total loathing for McCain, conceited little a–hole. And he thinks he’s wonderful. I mean, you can just tell, this little simper of self-love that he does all the time. You just want to kick him.

Thanks to Jason Rowan for the tip. Rowan is the KWLS digital pioneer who oversaw the redesign of our site and started this blog. The podcasts were his idea, too. He’s writing for Esquire.com these days. Check out his review of the Sooloos, a machine which will totally simplify your growing KWLS podcast collection.